Slow news week - Qs and As

Things are a little slow around here this week.  I even published this post without pictures the other day by accident. Sheesh.

L found some questions from DoubleRegistered on tumblr.  I am borrowing the idea from L to have some content to post!

1. What is the first thing you do when you get to the barn?
Depends on the time of day - am its get hay - Spencer does NOT tolerate me doing other stuff. He needs hay asap.  In the evening, I get grain ready and put it in their feeders before letting them in.

2. Is their a breed that you would never own?
Well, ok, an arab.  I've owned two and one arab/qh mare.  None of them have been a good fit for me, so I would be hard pressed to own one again as a riding horse.  I also wouldn't want to feed a huge draft like a clyde or a brabant!  And I don't think one of those would fit in my barn! lol

3. Describe your last ride?
Err...tricky question!  I think it was in July of last year?  Maybe?  I have no recollection of that ride or how it went.  Kinda sad, really.

4. Have any irrational riding fears?
I have a lot of fear, actually.  Maybe that is why I'm not riding as much.  Who knew these questions would be so therapeutic?  I have a fear of falling in a ring or arena and hitting my head/back on the rail or the wall.  I'm also nervous about falling off in a gallop in an open field.

5. Describe your favourite lesson horse?
I haven't taken lessons on a lesson horse in ages.  For the sake of this post, here is a mare - I think she was an appendix... - that I took some lessons on years ago.  I tried to learn to jump and she put up with me.  Although, I didn't ride at that place very long for some reason or another. 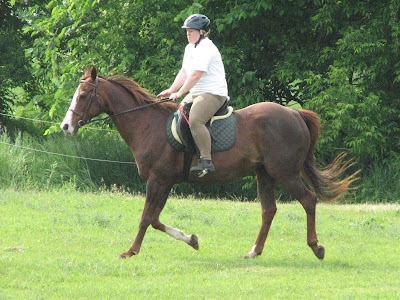 6. Would you ever lease out your horse? Sure - it would have to be carefully monitored though. If off-site, I'd want to do checks on the facility etc. as I've heard some scary stories about off-site leases that didn't end well for the horse.

7. Mares: Yay or neigh?Neigh so far, with one exception: I had a pony mare as a kid and she was great - opinionated and bossy - but a great trail horse.  So far as an adult, I owned one mare and it ended poorly.  I do sort of daydream about "connecting" with a mare and having a good relationship.  Clearly I read to many horse books.
8. How many time per week do you get to see your horse?
I'm so lucky - I see them many times a day, every day.  Having horses at home again (I had horses as a kid) is a privilege for me as an adult.  And I get to catch them doing funny things:

9. Favourite thing to do on an “easy day” with your horse?
Sit in the barn and listen to them all chewing on their hay.

10. Conformational flaw that bothers you the most?
I'm not a conformation expert, but a long back is something that I notice and don't like.

11. Thing about your riding that you’re most self conscious about?
All of it? LOL  I'm pretty rusty in the riding department.  I'd have to say my weight is a factor - I'm pretty self conscious about that and how I look in the saddle.  I'm also worried about leg position and the dreaded chair seat.  As a testament to this, I can't find very many pics of me actually riding.

12. Will you be participating in no stirrup November?
No, but I probably should!

13. What is your grooming routine?
It is pretty lax, unless I'm prepping a horse for a show.  Quick curry, body brush, hooves and fly spray.  Spencer really doesn't like being groomed, so I've just become used to doing the bare minimum with him.  Fred and Copper love any attention, so I tend to do more with them when the weather is decent. It is hard to do much in -30C.

15. Favorite season for riding?
Winter!  hahaha, just kidding. Have you seen the snow and ice where I live?  I'd have to say spring.

16. If you could only have 1 ring: indoor or outdoor?I prefer riding outside, but an indoor would be so awesome.  It would be amazing to do a bit of work year round instead of 6 months of fitting everything in and 6 months of sheer depression and misery winter.

17. What impresses you most about the opposite discipline (english vs. western)?

18. You have unlimited funds to buy one entire tack set for your horse, what is he/she wearing? 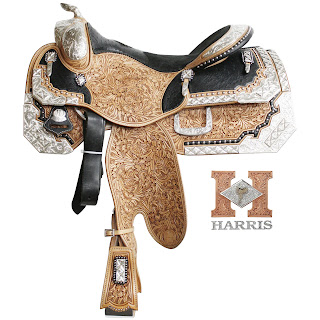 And for Fred, a sterling overlay Kathy's halter with green stones!  We have a plain silver plated one, but the sterling is the fancy one!
19. How many blankets do you have? When do you blanket?
I think I own at least 12 blankets between all 3 horses.  I blanket in the winter, fly sheets sometimes and nylon sheets overnight before a show.

20. What is your horse’s favorite treat? Favorite place to be scratched?
Copper - anything and anywhere.  Dude loves treats and scritches.  :-)
Spencer - peppermints and his face and sometimes his chest if the bugs are bad.  The rest of the time you can leave him alone, pls.
Fred - is a bit picky about treats until he tastes one and then mobs you.  lol  A lot of show barns do not feed treats, so he isn't used to it.  He is an attention ho, so scratch away!
21. Something about your barn that drives you crazy? The hired help is terrible!  Lazy and slow.  hahaha - since that is me, I feel I can say that.  On a serious note, my barn is a bit small to store hay for 3+ horses.  I luckily have a hay person that delivers throughout the year.

22. Roached manes, pulled manes, or long flowing manes?
Pulled or at least trimmed.  And I use scissors. Sorry L!  I think flowing manes are a ton of work and the horse has to have the right texture of hair.  Spencer has terrible coarse hair and it rarely looks nice, regardless of what I do!

Exhibit A:  Copper's bowl cut (from several years ago).  I use a thinning rake on him now which looks a bit better. 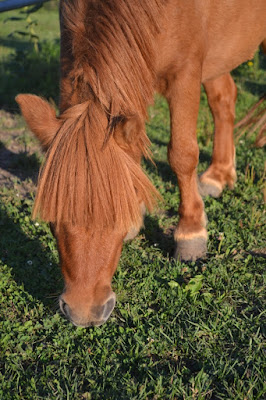 23. Can you handle a buck or a rear better?
Neither! But I'd likely do better with a buck.  At least the first one and then I'd be off.

Phew!  Those questions were more work than I thought.  And it took a while to find all the old pictures - note to self: organize and back up photos!
- May 23, 2019

Email ThisBlogThis!Share to TwitterShare to FacebookShare to Pinterest
Labels: backyard barn, fears, Qs and As

My name is Fred, they call me Fred

I've been meaning to write updates for all of the horses, cause this is a horse blog after all... I figured there should be some horse c...