The latest happenings at BBQH HQ!

*editor's note:  I started this post 2 weeks ago!
Here are a few updates from the past couple of weeks:

We got 100 bales of 1st cut tucked in the barn (yeah!) and I even used my truck for the first time to get a round bale!  I love having a truck, even though it is a small one.
My friend/boarder and I started fixing the electric fence too.  Fred has broken the electric rope in 3 places so far this spring, so it was time!  We fixed the spots he trashed and then we replaced all the wiring from the barn to the start of the circuit and even dug up one of three grounding rods to replace the wiring.

Since Fred wrecked the fence, he gave himself some rope burn on both pasterns.  *sigh*  I've been doctoring it, but the left hind gets a little puffy on me if I don't stay on top of putting ointment on it.  And to make matters worse, I noticed Fred was limping a bit this past week - not super lame, but definitely NQR. I was hoping it was just the rope burn bugging him or at worst an abscess. Sure enough Monday morning the farrier was out and was able to open up an abscess on his the sole of his RH.  Fred seems to like being kept in his stall and all the attention and food he has been getting, but his leg was swelling too much being kept in, so I tossed him outside last night to see if that would help get the fluid moving.  It looks much better this morning, thankfully.
Trying to get pictures with a giant cuddly 4yo gelding is tough.
Fred has been in the barn for his legs lately, but as well to keep Bailey company. Bailey somehow cut his lip open and needed some stitches.  It was one of those injuries that we can't quite figure out. My hunch is that he was rubbing his face on his leg and cut it on the nails of his shoe. He has been pulling shoes like crazy and one had nails sticking out.  Horses, I tell ya - always keeping us on our toes!
Spencer is totally judging those horses that get hurt all the time - he would *never* do something so silly as to get hurt at his advanced age.  Lol  He has a big scar on his face from an injury when he was young, so I guess he learned his lesson?  I was trying to get a picture of his scar to show you guys, but I had a hard time with the light and with photo bombers!!
I have my fingers crossed that Fred is back to being sound now that the abscess has done its thing.  Having a hospital ward going for these guys is a lot of work!
- July 24, 2019 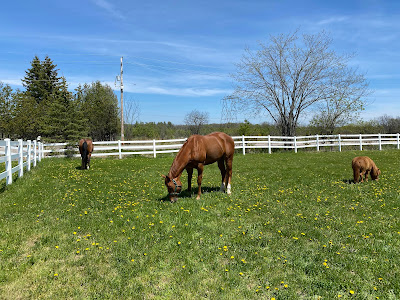