We had a couple of days of storms with high winds and rain over Hallowe'en - our city was contemplating moving Hallowe'en trick or treating to another day so the weather would be better for the kids!  A lot of people were very angry about this, so it was kept on the same day!  I think the city of Montreal did move trick or treating to Thursday or Friday!

Anyway - I was planning on taking pictures of Fred in his skull gear on Thursday, but it was too gross to get decent pictures outside.  This attempt at a matching outfit was inspired by Stacie at Amateur at Large - her outfits and her horse's outfits are pretty amazing, so I thought I would do a post in homage to her.  ;-)  Turns out it is way harder to get good pics and put everything together than I thought. I also dislike taking pictures of myself, so you won't see much of my outfit.

When I did my big shopping spree in late September, I found a cute skeleton saddle pad and halter from Horze.  I like skulls, so I couldn't resist.  They even had a skeleton rain sheet, but I tried to have some self control and didn't get that.
I also made him wear a fly bonnet even though the flies are long gone (one good thing about November).  My Mom made this for me a while ago and she said it was a pain to crochet, so she wasn't going to do any more!  hahaha.

I'm not a fan of the Horze halter - the fit was a bit weird, even on Fred's big head. It wouldn't fit a smaller horse well at all.
Man, my saddle needs some oil. Ahem - add that to the list for this month!  I like to bring tack inside and work on it by the fireplace!
I found this skull hat (or toque if you are Cdn) at the Dollar store last year. It cracks me up.  It wasn't really that cold, but you know, for the sake of the themed outfit...
The rest of my outfit was boring, so I didn't attempt a photo. I was wearing black tights, black paddock boots and my fitbit with skulls.
We worked on some showmanship stuff and practicing setting up on the laneway, since everywhere else was a muddy swamp.  I switched Fred back to his regular halter after and gave him a big cookie as a reward. I won these cookies in a raffle at a club banquet last weekend! They are super cute and Fred loves them.
And I broke my no-shopping streak on Friday -  I only made it 8 days - I had to buy Fred another rain sheet at the local tack shop, since his new green one is not waterproof at all! Ugh.

On Friday night, I went to a paint night with a big group of horse friends.  It was a hoot - the painting is easy - they give you templates, so you don't have to worry about the actual painting part as much.  This is a key factor when adult beverages are involved!  Of course I chose something about cats, since they didn't have any horse options.   We are going to do another one this winter and my friend is going to send them a bunch of horse quotes for signs, so that will be fun. 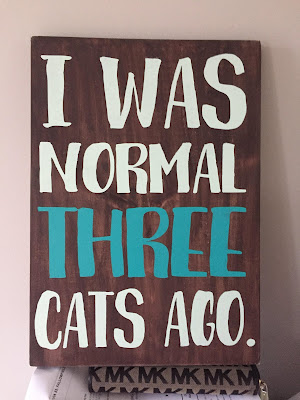 This weekend has been all about tack and cleaning up and organizing my little barn.  It sort of looked like a tack store exploded in there.  lol  I have a bunch of tack I'm selling for the therapeutic riding centre and a bunch of my tack that needs to go. I brought all of that in the house to clean and take pictures so I can list it online.  I also hung up all the winter blankets and put away (sniff!) all of the summer gear.  So, I'm making some progress there!

And my last random update is that I also have to pack this weekend, as on Thursday I'm heading out of town for a little jaunt to Disneyworld!  It was my Mom's 70th bday this year, so she wanted to go to Disney with my cousin and I.  We fly out of Detroit early Saturday morning and I'll be gone for a week!
- November 03, 2019