I’ve been trying to draft this post for a while!  I have a hard time 100% endorsing halter classes, with the halter industry being so specialized.  Yes, I own a horse from halter bloodlines that was bred in the hopes of doing well in that one particular class.  There is A LOT of criticism of halter horses online – a quick google search will show you all that you need to see.  As an amateur, I feel that I can experience the class, learn about how to show my horse and learn about feeding and keeping him fit to do as well as I can locally without being a big supporter of the whole industry.
Why do I do it if I don’t 100% like it?  That is a question I struggle with – I wrote about it more detail in an earlier post so I won’t go into it again here.  Tl;dr – I can work with Fred at home without a coach, lessons or fancy tack and I can still experience breed shows without needing a fancy riding horse.


Another note: I did not want to use photos I found online from shows/breeders in this post, as I don't want to bash anyone or anything, as that is just not how I roll!
Ok, on to the meat of this post:
AQHA has halter classes broken down by age and sex and they also have a performance halter class, which is for riding horses that have a certain amount of points from riding classes.    All of the 1st and 2nd place geldings from all the classes then go in for a grand/reserve championship and then the same happens for mares and stallions.  The grand/reserve titles are what people are really after, as your horses is up against a larger selection of the best at that particular show.
Many western performance classes are scored and have comments, such as showmanship, horsemanship, trail, reining, western riding and ranch riding.  Halter does not have any scoring or feedback, so it is purely the opinion and tastes of the judge.  All breed show judges are carded and go through training, but trends, personal preferences and politics (at big shows) definitely come into play.
There is some really good info on the University of Arkansas Ag Dept. website about judging a halter horse (https://extension.unh.edu/resources/files/Resource002677_Rep3962.pdf) and some of the info in my post is from that article.
The halter class is a class where the horse is judged based upon its conformation, overall appearance, and usefulness. Conformation is defined as the physical appearance of a horse due to the arrangement of muscle, bone, and other body tissues.
When evaluating a halter class, the following four factors should be used (in that order) to select and rank the horses being judged. 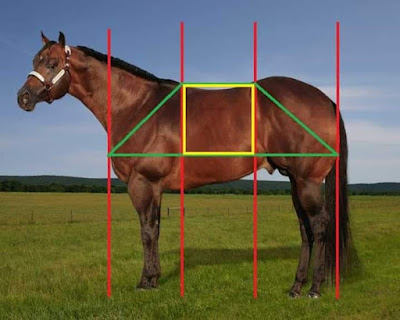 This stallion photo gives you an idea of the balance and proportions that are sought.
(Edited 11/16) For a halter class, you walk into the ring toward the judges, they then move out of the way and you jog the horse straight away from the judges and then around a corner.  They are watching for soundness and decent movement and if the horse tracks well (ie  - minimal paddling/interference, etc. ) A lack of muscle and overall turnout/appearance will affect the judge’s first impression also.


The handler is not judged in a halter class, but if you cannot set your horse up in a way to show it off to the judge, it will affect your placing  – especially in an open class, in amateur classes they cut you more slack.   For example – if you do not try to set your horse up squarely (breed halter doesn’t use the same set up as English in-hand with one back leg set back) or are not trying to show your horse to the best of your ability, they will ding you.
I don’t have many pics of me showing Fred, but here is one where I am trying to keep his head and neck up and his ears up.  The horse can’t be moving around and bopping around with their head. 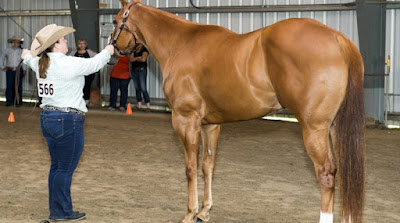 You can’t tell a lot from this picture of Fred (he is a 3yo here), but he has moderate muscling – especially his forearms, gaskins and hip.  He is turned out properly – clean, shiny, chalked white socks, properly fitting show halter.  Fred is a bit weak in how his neck ties in to his withers and in this picture, needs more weight over his ribs/mid section.   He doesn’t have the nicest head either – he is a bit plain looking.
Now that he is 4, going on 5, he has put on more weight, his topline is filling in and his chest has widened, but I don’t have any pictures since he looks like a yak right now! lol
Compare Fred’s head to this picture of my friend’s horse – I showed him in 2016. He has a gorgeous head and is very striking.
Here is a video that is teaching people how to judge a halter class:  https://www.youtube.com/watch?v=sXJ4L5dsUeI
If you have time to watch the video all the way through you’ll see a pretty standard AQHA/APHA judging of a halter horse class.  They show the suggested placings and some rationale.  Read the comments though and you’ll see another story.  The horse that people would want to ride is not the class winner.  This kind of thing is common in halter as a specialized industry.  Some judges prefer “performance” horses, which are horses that are successful under saddle as opposed to the specialized beefcakes.
If you are interested in more details on QH conformation for halter – the University of Nebraska has a good 20 min video with lots of information: https://www.youtube.com/watch?v=0z9AlY-xMkQ
And that is it in a nutshell...  More to come on selecting a stud for breeding to hopefully show in halter...
- November 23, 2019