January got off to a bit of a rocky start...we had a family issue that took up some extra time.  Between that and work being very busy, I haven't had a chance for much else.  The past three weeks has had me running to work and then running home to the barn to throw hay and check water, but not much else.

Things are starting to look up a bit now as the days will be juuuussssst long enough for a bit of daylight after work.   I'm looking forward to taking a bit more time out at the barn and just hanging out with the horses while they eat their hay.   I'm also hoping to start working Fred a bit, just easy in-hand stuff when the weather allows.
We've also had some crazy weather - we've had two or three cycles of above freezing temps, rain, ice pellets and then snow, which is just a weird combo.  One day the paddock was just a skating rink - every inch of it was ice. I wish I had taken a picture to show you guys - it was raining and the water was just running off the ice - very weird.  My place is mostly flat, but the paddock had just enough slope to make it treacherous. I kept the horses in until the snow came back and improved the footing again.


Now we are on to straight snow, which is much, much better, imho.  We had a few inches last weekend and another few inches this weekend.   Fred has been busy wrecking his current blanket, which is always fun.  Somehow he ripped apart the neck cover on his blanket and I don't think I'll be able to salvage it.
﻿  Now that we have some snow piling up, my boarder has been bringing over her snowmobile to help pack down the riding ring and a little loop out in the back pasture. Of course, it keeps snowing so she has to keep going over the trails.  She is trying to ride as much as she can throughout the winter, which is admirable, given the unpredictable weather we've had so far!


One of the many reasons I love having the horses at home is being able to fix issues right away.  Exhibit A:  Hubby looks out the window and tells me that Fred is "walking funny" and I'd better go check him. (his description).


So, I went out to find the back end of the blanket all twisted and flipped up.  One of the stretchy leg straps was down below his hock, causing him to "walk funny".  lol *sigh*
He wasn't too concerned that his butt was getting wet and his leg was tangled - you can just see the black strap on his LH in the picture.  I have a feeling this blanket won't be around much longer. I'm not a fan of how it fits him, so it is probably time to let it go.


Not much else is going on here for the moment, so I'm off to shop online for another blanket for Fred!

Ok - more Rip updates are coming!  I'm going back in time here to keep things sort of chronological where I can. Rip was born on Jan 17... 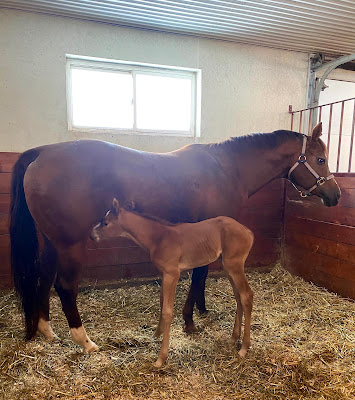