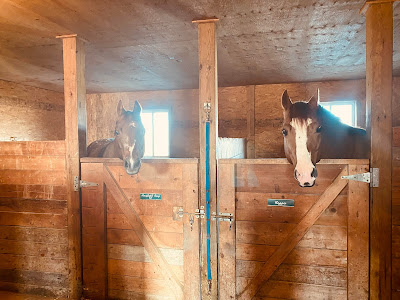 They settled in pretty well, considering the hooligans that were outside staring in their windows all the time! LOL  Fred and Ivy were pretty excited with the new guests and spent a lot of time at the windows until everyone settled in.  I ended up keeping Fred and Ivy outside for the 2 weeks Lucy was here, since a) I only have 3 stalls and 5 horses and b) I didn't want anything to happen to Lucy, since is very preggers.
After Lucy left for the maternity barn, I worked on integrating the other horses with Spunky.   I have been keeping Copper in with Spunky and Fred and Ivy have been staying outside, except for their am/pm grain.   Spunky stays in a lot because, well, he has issues.  lol  He had a horrific tendon injury a couple of years ago and my friend rehabbed him, got him barefoot and on limited turnout in a round pen.  She is aiming to have him on more turnout when she moves to her new (old) farm in the spring.  So, we aren't rocking the boat here and just doing what he is capable of.
Spunky has been going out for 2-3 hours a day in his round pen (lent to me by my friend!). My goal is to get him up to 5-6 hours outside during the winter. Apparently he loves the cold weather, so this is the perfect time to have him here.  Fred and Ivy seem to be fine with all of this and there is a lot of time spent biting each other's faces over the round pen and maybe some squealing from Ivy (she is in love).
All in all, things are going well.  The horses are settling and I'm getting ready for winter.  Working from home has been so nice, since I can get out to the barn in daylight and do the bulk of my chores without a flashlight/headlamp!
- November 12, 2020 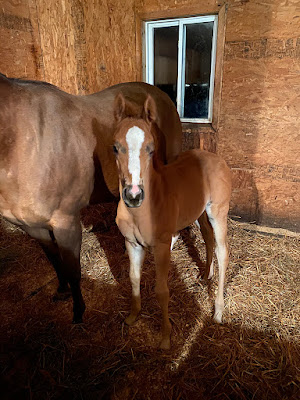