Well, I was sort of getting caught up here, then things went south again. Lol   Well, to be fair, work was pretty rough last week.   Even though I'm still working from home, I pulled several late nights last week dealing with lots of things that made the news. Sigh.  In good news, things are slooowwwllly starting to open up here now that more people are getting vaccinated. I had my first shot a month ago, which is way ahead of what was predicted.

OK - on to foal pics!  I guess this is a better late than never sort of thing at this point?  Lol

This brings us back to late Jan/early Feb. Rip was born on Janurary 17 and stayed at the fancy maternity barn until the end of Feb, when he and his dam came to my place.

Rip, like most foals grew (and still is growing) like a weed! Around the 3-4 week mark, a creep feeder was put in the stall to start giving him some foal starter pellets.  The only catch, is that his dam outsmarted all of us and was able to lick some of the pellets out of the feeder!  Lol

The barn owner also handled Rip for us as well, since we weren't able to get there that often. He haltered him, picked up his feet and led him around the barn a bit.  He also got some turnout in the arena when stalls were cleaned.

He got to meet some of his neighbours as well!
As the end of February approached, I started to get excited and nervous as Rip was due to come home.  I've never worked with a foal before, so I had a lot to learn. 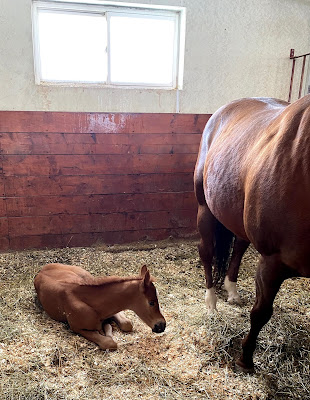 Hopefully it won't take me so long for the next post!