I've had another spell of radio silence here.  This time for good reason.

On Wednesday, October 20th, I lost Rip to colic.  He had just turned 10 months old.

My friend called me around 10 am saying that Rip was off.  We called the vet and I rushed over to her farm.  The vet did an exam, gave meds and was guardedly optimistic that he would come out of it.

The next 4 hours were horrible. You are all horse people, so I know I don't need to explain.

By 4pm, we had the vet back and due to his condition, poor vitals and lack of gut motility, we made the decision to say goodbye.

To say that I am gutted and heartbroken is an understatement. He was my dream horse and I was looking forward to many years of showing him and having fun.  I was *thisclose* to shutting down the blog and quitting horses...

To make matters worse,  7 days after we lost Rip, we also said goodbye to my friend's gelding Spunky.  He had endless lameness issues that could no longer be managed.  He was only 10.

This horse was the barn clown, was so handsome and brought many people together over the years. In fact, he is how I met my friend 5 years ago...  He is the first halter horse I showed and generated a love for that discipline...  *sigh*

We joked that Spunky was "Uncle Spunky" to Rip.  The two of them got along quite well and Rip would spend his time outside sharing hay with Spunky and clowning around.

I hope they are running together somewhere, getting into trouble... 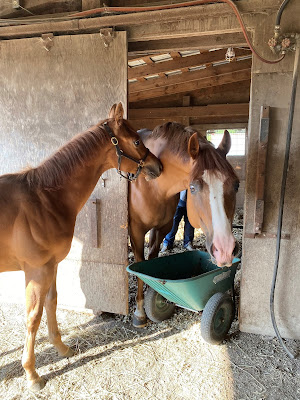 I think I'll be back. My blog needs a rebrand - new name, something - not sure exactly what.  We'll see if inspiration strikes or not.